What if only part of my power is out in my rental home or apartment? GFCIs, and circuit breakers.

If all of your power is out, its probably a power outage. Contact Duke Energy 800.343.3525. If power is out to some of your outlets, then let’s do some testing, and watch a great video on it! 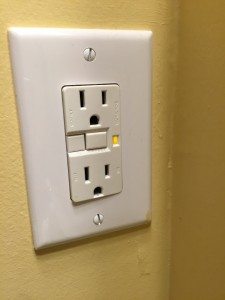 This is really just a variation on tripped breakers. Many circuits in a home (especially the kitchen, bathrooms, and outside outlets) have what’s called a GFCI (or GFI). Its a “ground fault (circuit) interrupter”. The GFCI is a device that shuts off an electric power circuit when it detects that current is flowing along an unintended path, such as through water or a person. That’s a good thing! GFIs can trip for a variety of reasons and they kill the power to the circuit until the GFI is reset.

To reset it, you have to find an outlet that has two buttons on it: test and reset. It will also most likely have a glowing yellow/orange light when it is tripped. Push reset.

If it immediately trips again, try unplugging stuff from the area and resetting it. If you find that it doesn’t trip after you unplug something, then there is likely something wrong with that device. It is also possible for outlets or lights to end up with a ground or neutral wire move and touching something else, creating an “unintended path.” If resetting doesn’t fix the issue and you can’t find a problem device, then submit a ticket and we can have an electrician come out and check it. Note, resetting a GFCI is like home-dweller 101, basic stuff. 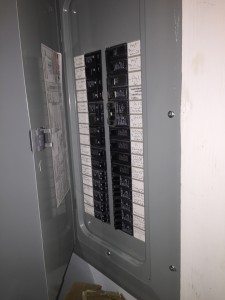 Circuit panel. Look for a breaker that is either off, or partially off, then push it all the way off, then back on.

Ah, so, in most cases, if some, but not all, of your houses/apartments power is out, you have most likely tripped a breaker. Perhaps too much stuff was plugged into an outlet, or a surge caused an overload. Find your circuit breaker panel (often in the garage or a closet), and see if one of the breakers is partially flipped back. If so, push it all the way off, then all the way back on, and see what happens. If should reset the part of the house without power. If it trips again, then a couple things can be going on. The most likely is that something attached to that breaker is shorting out and caused it to trip. In rarer cases, a breaker can be bad, but this is not very frequent.

This video covers everything from the GFCI to circuit breakers, and a bit more.

There is also a very rare situation where power can be apparently out in part of your house and it is still Duke Energy’s responsibility. Its possible for something to happen to one leg of the line (“one phase”) to your home, causing the home to essentially operate on half the voltage. If this happens, most lamps and similar devices will still work, but big appliances that require more juice will not…. Yes, I had this happen on my home…

If power is out for part of your home and you can’t figure it out, just submit a ticket through your portal and we will have an electrician come check it out. Note that if you have something plugged in that is tripping the power, this service call will be wholly your responsibility. Space heaters and such are some of the most common culprits.