Something different to do: M. Butterfly opens Friday at IU Bloomington

Hey Elkins Apartments residents! A little something you may have missed upcoming in Bloomington this weekend:

Hoosiers are invited to watch this dark tale play out as civil servant Rene Gallimard falls for operatic diva Song Liling. And what’s so dark with that? Well, you see, Rene is a servant for the French embassy in China while Song is actually a Chinese man. One thing leads to the other, per usual, and uh-oh; Rene is charged with treason as Song reveals his identity as not only a man, but also a spy. Well, that escalated quickly. What more could you want on a Friday evening than a juicy scandal that you aren’t involved in? 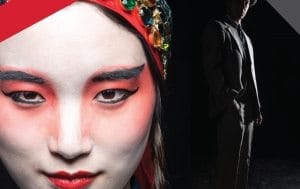 Check out M. Butterfly at Wells-Metz Theatre on the following dates:

Now that you’re intrigued by its plot and you’ve saved the date for a show above, it’s time to give up some spare cash for a ticket.

All tickets can be purchased between 10 a.m. and 5 p.m. on weekdays at the IU Auditorium Box Office or online while you’re spacing out during your 9:30 a.m. lecture.

As always, if you need anything in your rental townhome, apartment, or house for rent here in Bloomington, let us know! And if are looking for a new place to live, check out our huge collection of 1 to 5BR homes, townhouses, and apartments!

OR How about the Opera at Memorial Stadium… 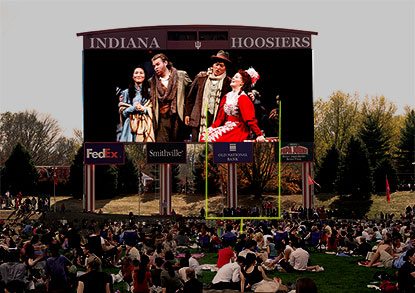 On Friday, Oct. 24, those two worlds will team up in a big way with “Opera in the End Zone” at Indiana University’s Memorial Stadium. Don’t expect divas to don shoulder pads. And unlike the TV series “Glee,” the home team isn’t about to break out in song.

Beginning at 8 p.m., the opera “La Bohème” will be live-streamed on the stadium’s Jumbotron, at the same time it is performed on stage at the Musical Arts Center.

“We are thrilled to partner with the world-renowned Jacobs School of Music to present ‘Opera in the End Zone,'” said Jeremy Gray, associate athletic director at Indiana University. “It will be a unique and extraordinary event that integrates two proud IU traditions: the Jacobs School of Music and IU Athletics.”

The timeless appeal of “La Bohème”

It’s not every day that people have the chance to watch an opera simulcast beneath the stars — much less at a football stadium.

“We’re grateful to IU Athletics for making this unique setting available for this first-of-its-kind event in the university’s history,” said Gwyn Richards, dean of the Indiana University Jacobs School of Music. “We hope that people of all ages will join us for ‘Opera in the End Zone.'”

“La Bohème” seems the perfect production for such an unusual presentation. The Puccini opera is a perennial favorite with audiences — so much so that it has been staged 14 times at Indiana University since its first appearance with IU Opera in 1950.

“‘La Bohème’ is widely considered to be the most popular opera of all time, and this event creates the perfect introduction to the art form for those who have never attended before,” Richards said.

Set in 19th-century Paris, “La Bohème” is a story of love and cafe life that unfolds during the Christmas holiday season.

The 2014 production at the Jacobs School of Music features guest conductor Paul Nadler, who has led the Metropolitan Opera company in more than 60 performances, and visiting stage director Jeffrey Buchman. The intricate sets and lavish costumes were designed by retired professor C. David Higgins. And, of course, the production draws upon the school’s rich pool of student talent for its cast.

“Opera in the End Zone” playbook

“Opera in the End Zone” will be presented weather permitting. Check the Jacobs School’s home page at noon or later Oct. 24 to be advised of the status.

Entrance will be through the southeast gate of the stadium, which opens at 7:30 p.m. that day. No tickets are required for this free, first-time event. Parking is free.